More accustomed to the taste of my mother’s burnt toast and beans combo, I was hoping and praying that a trip to a 1-Michelin starred and 4 AA Rosetted gourmet restaurant in the heart of one of  London’s most affluent hotspot’s – Green Park would be able to suppress those charcoal tasting memories of mother’s best dishes.

Did it do the trick? Let’s find out, food critics eat your heart out at my review to follow: 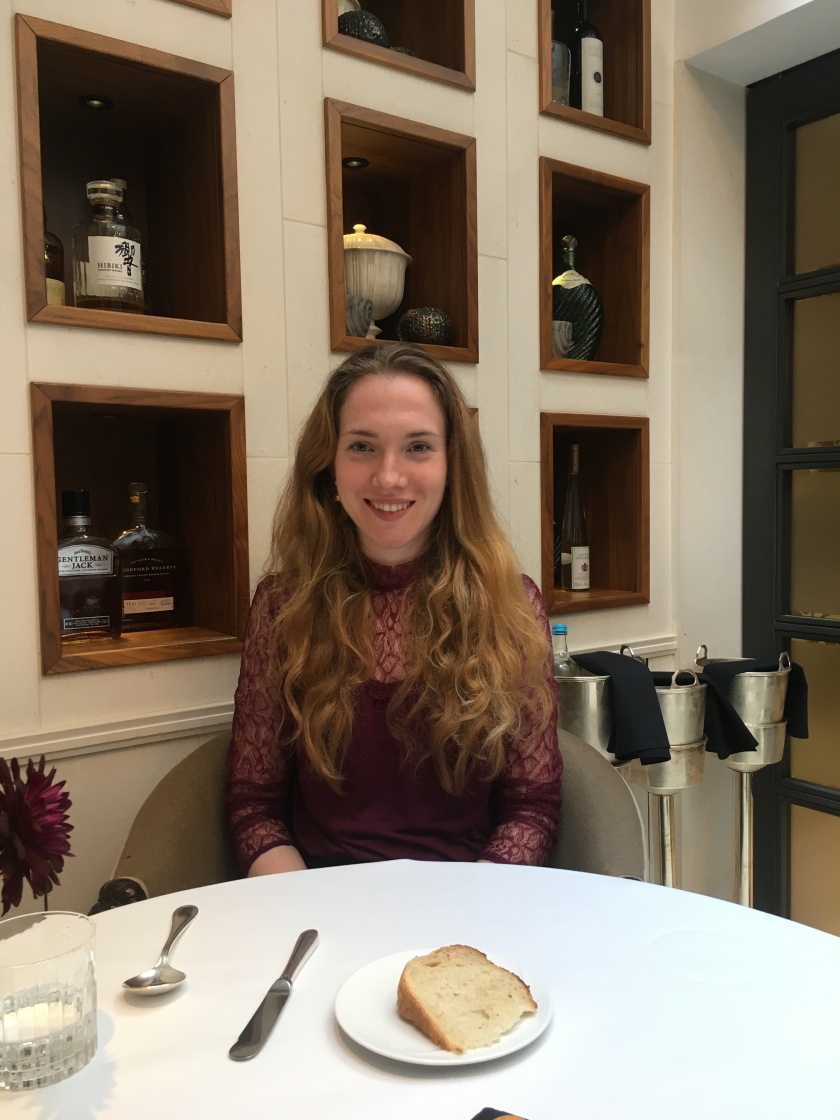 Here’s me with a piece of bread.

Initially when I walked into the restaurant I thought I’d actually entered the wrong place, for it looked more like the Louvre in Paris than a place you’d get stuck into some lamb’s neck at. Anyhow my state of confusion quickly dissipated as I followed the overly nice and handsome waiter to the table for two beneath the beautifully painted piece of art, it was done with much ease I can assure you of that.

The menus arrived, my brother and I went for the 3 course option (as you do) and decided to go halvsies on each dish, as there was a choice of two for each course.

Can you guess what this was? Yes, liquid gold. A little teacup of deliciousness in the form of fish broth frothed so lightly the clouds above us were jealous. Sprinkled with crispy little croutons complimentary of the chef.

With our appetites well and truly wetted from the soup + bread pairing I was ready for the starters!

Which appeals to your more from the below choices:

This had to be my favourite dish of the experience to be honest. The saltiness of the mackerel worked so well with the sweetness of the apple, and the crispy onion rings topped it all off with a little ‘crunch’. Delightful, however being carby me, I couldn’t help but think ‘where are the chips at?’

A tasty little parcel of pumpkin and Parmesan, the pine nuts gave it a crunch so that it wasn’t to reminiscent of baby food. But being a fan of umami flavouring, the mackerel stole my heart. But overall even though I’m not a huge pasta lover, the ravioli damn near converted me. 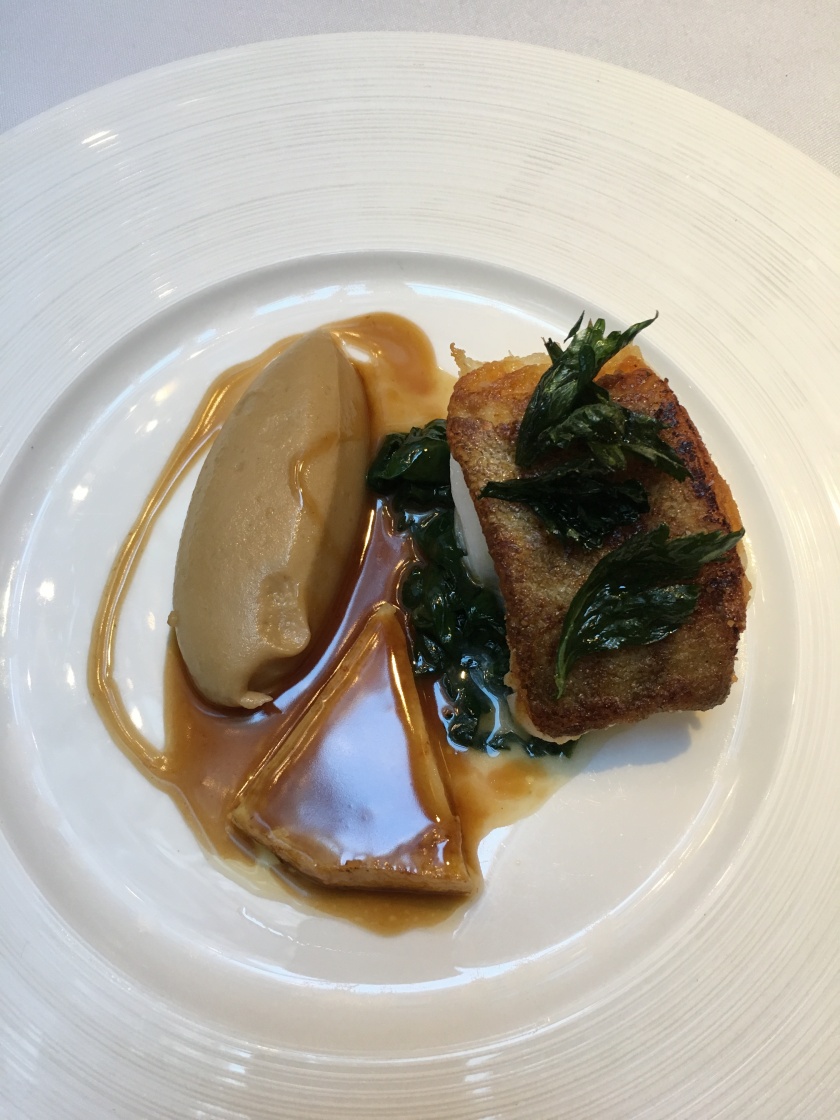 Cod is quite a bland fish to me, like alot of white fish but I have to say, somehow they injected some taste into this one. It wasn’t dry which is another reason I tend to give white fist a wide berth. Nice chunky piece with mash and a fishy gravy, what’s not to like?

Assiette of lamb with rosemary jus

Look at the shine of that sauce! You can almost see me taking the picture in it! I loved the fillet and the neck, not too fussed on the meat pie, all I could hear the waiter say was heart and liver which almost turned my stomach. Other than that, a tasty dish.

As a fan of chocolatey desserts, I can’t lie when I say I was looking forward to this the most when I seen it on the menu. It looks great doesn’t it, apart form that chocolate smear on the bottom, can a chocolate smear ever look appetizing?

The chocolate droppings were suped up with hazlenut, the little chocolate platform was composed of smooth chocolate paneling, which encased a hybrid like texture of cake and mousse. If that even makes sense, I don’t know what it was exactly, I just know it tasted good! Finished off was the sugar work which  I accidentally snapped off and swooshed onto the floor in one fell swoop as I reached for a spoon seconds after this photo was taken (better after than before). 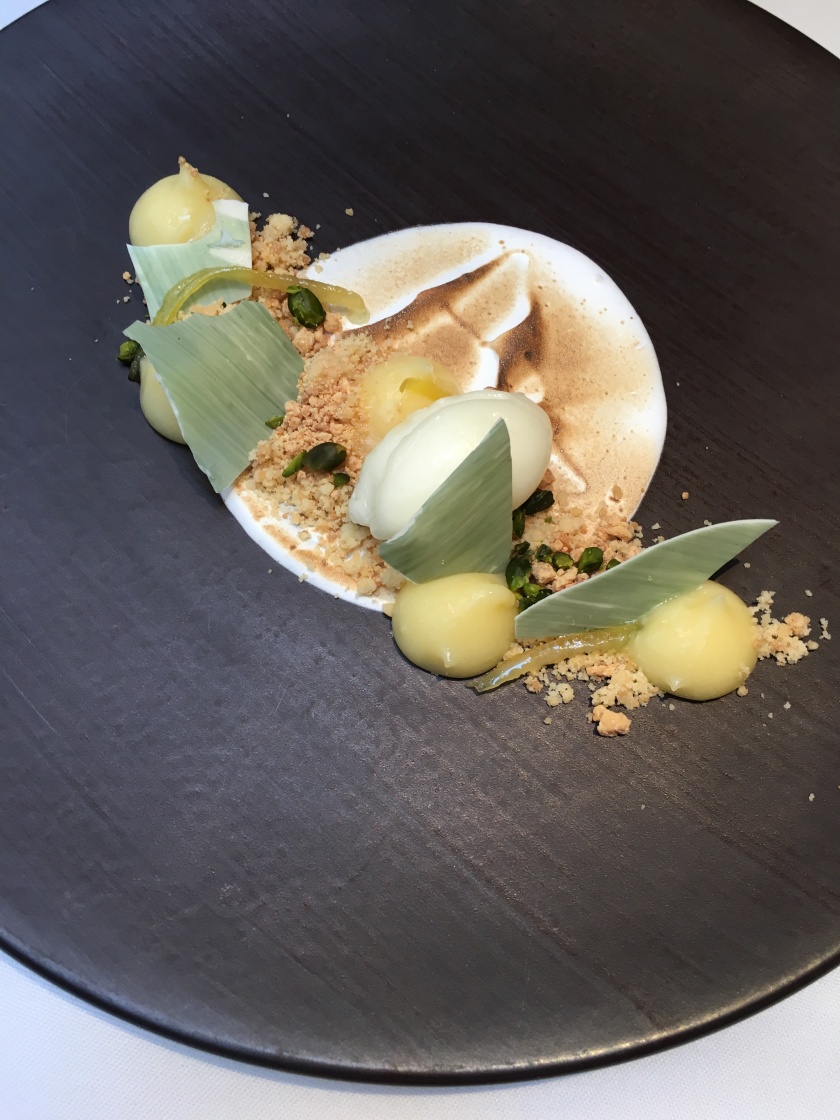 Lemon Meringue with a sable crumble and yuzu lemon sorbet

Thank goodness we didn’t have sensitive teeth, for the sorbet was as cold as the arctic, the chilled temperature mixed with the tartness made for a zesty explosion of refreshment. The only negative thing I would say was – where was the meringue?! It was so flat to the plate 😦 But anyhow I loved the flavours. Great dessert to end on, for it really cleansed the palate after the several courses of rich, intensely flavoured plates of food.

So what did we think of the food, should you give William  Drabble a go when you’re in London?

We’ll let this image be the deciding factor for you: